Four of us were playing some of the multiplayer modes in COD:AW last night. Myself, @ANiMOSiTY, @Skeeb23 and RhavinX. Skeeb was hosting. Despite that Skeeb is in the US, I can’t say there was any time that I noticed any particular lag. I don’t think it makes much difference in Exo Survival (Coop, max 4 players), but I didn’t notice any lag in particular when playing some Free for All, either. I think we finished playing at around 02:30-ish this morning.

For what it’s worth, the game is very very pretty, and the amount of detail in the maps is incredible.

Exo Survival starts with 4 available maps (Tier 1). In order to unlock more maps, you need to complete 50 rounds across as many games as you like on Tier 1 maps. Note that it says ROUNDS, not games. So if you survive 25 rounds each in two games, you’re covered. I think my best survival rate in a game was 12 rounds so far. 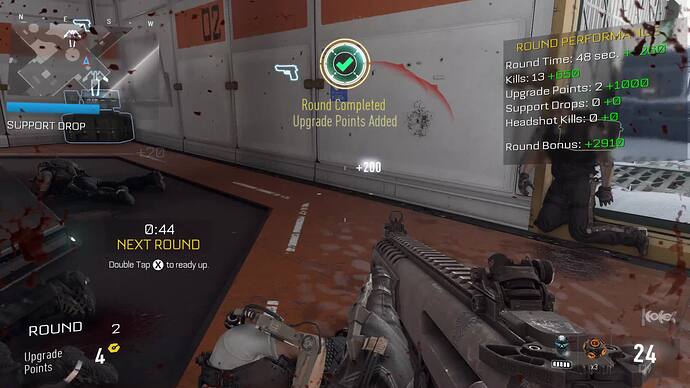 Call Of Duty Advanced Warfare's features a new co-op mode called Exo Survival. This is a fast-paced survival mode where players fight against waves of

Most epic game so far was reaching round 46 in a public game.

It was great fun!