Finally happy with my 3d printer

I got a Creality CR6-SE near the end of last year.
Before even starting to properly use the printer, I installed the community firmware, which is a damned sight better than stock (apparently). I like it, anyway.
I managed to print a few things before I started getting frustrated with it. I had hassles with prints not sticking properly. Tried hairspray, but it was a bust (I just used what my daughter had, a different brand may have worked better), tried a glue stick with some success, but ultimately was having hassles with the print unsticking during prints. Also there was heavy stringing despite doing multiple variants of calibration towers (heat, stringing, etc).

I was so frustrated with it that I just stopped using the printer.

A few weeks ago, my wife wanted me to print something, so I figured I’d give it another go and see if I could solve my problems. I managed to find some useful tips and various YouTube videos specific to this printer.

This printer has an auto leveling function that uses the pressure of the nozzle pressing in to the bed. It’s quite nifty, but I realized that the leveling matrix was quite different every time I ran the leveling, so something was definitely off.

Apparently a common problem with the leveling system is that the print head presses too hard during leveling, so using my digital kitchen scale, I checked the pressure. That was well within the recommended range, so it wasn’t that.

Something I noticed that seemed a bit off to me, is that the Y-axis had a distinct thump near the middle, and towards the ends while moving it back and forth, almost as if there were stops, however it has been doing this ever since I got it, and surely the factory wouldn’t mess this up, right? After consulting the discord server for this printer, I found out that the stops/thump are definitely not normal, so I figured out how to remove the bed (quite a few screws - most of which were really easy to unscrew… (hint) ?. Anyway, removed the heated bed plate and figured out how to adjust the rollers - the back one was really tight, and there was rubber debris on the wheels. I loosened up the wheels until the bed wobbled, and then gently tightened them again until the bed was solid with no wobbling. No more thumps!

I reassembled the heated bed plate - which was interesting, as it sits on loose plastic cylinders that you put the screws through, so it was a bit of a challenge to line everything up without sending them flying, considering there’s 11 of them. I made sure that the bed screws were tight.

I also checked the level of the x-axis, and it seemed to be spot on. Re-ran the leveling process, and the result was much improved.

I was ready to do a test print. But tragedy! I discovered that the remote extruder cover had cracked. Apparently it’s a common problem with these extruders. Dependable extruder, my ass. 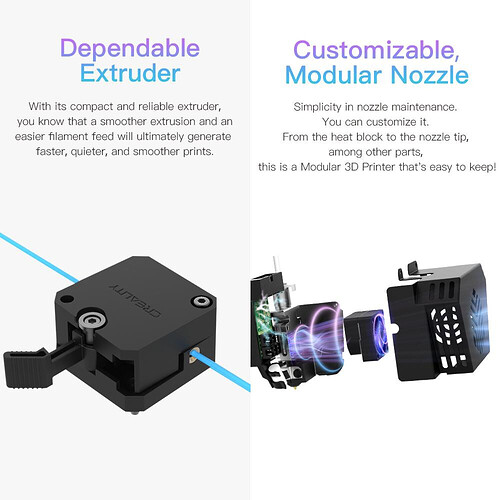 Trying to load filament resulted in the dreaded extruder click. Filament would not move through it as it had no grip.

I scoured Amazon for a metal dual gear extruder, and ordered it. 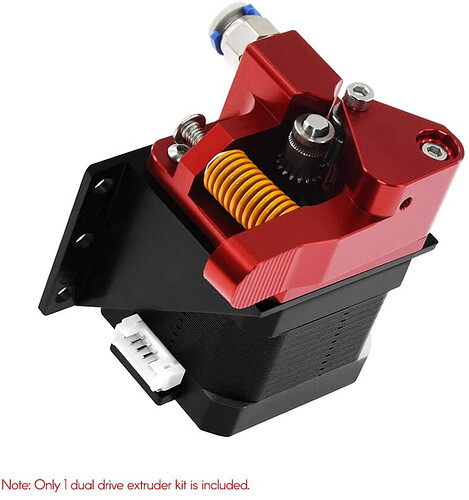 It ships completely disassembled.
Following some advice I saw on a youtube video, before assembly, I filed down the grip gear enough to install a home made plastic washer and also greased the bearings on the grip shaft. There’s supposed to be a washer on the top and bottom of the gear, but I had no more patience for sanding that gear, so I just installed one.

Now fully assembled and installed, I realized another issue. The filament entrance for this extruder is a good ~10mm higher than the original extruder, and there is a filament-out sensor prior to the extruder. I had to remove the sensor so I could print a shim to raise the height. I just left the sensor loose temporarily, but the new extruder works a treat! Successfully re-calibrated the e-steps (did it twice in a row and there was no difference for the second one). Printed the leveling pattern successfully, so then tried to print the sensor shim, which printed with no issues. Shim & sensor are now properly installed, and everything is working like a bomb. I’m able to print with a freshly washed (dish detergent) glass bed and the print sticks properly, no glue necessary. In fact, I have now done several prints and they’ve all turned out great.
Currently have a print running that’s on 16h51m of a ~17h33m-estimated print and so far so good.

I must say it’s very satisfying experience to design something and then print it.

Oh - and something else I changed, was that previously I was using Cura slicer. This time around I decided to give prusa slicer a go, and I have had zero problems. So not sure if it’s all the adjustments I have done to the printer, or the slicer, or a combination of both that is working for me. 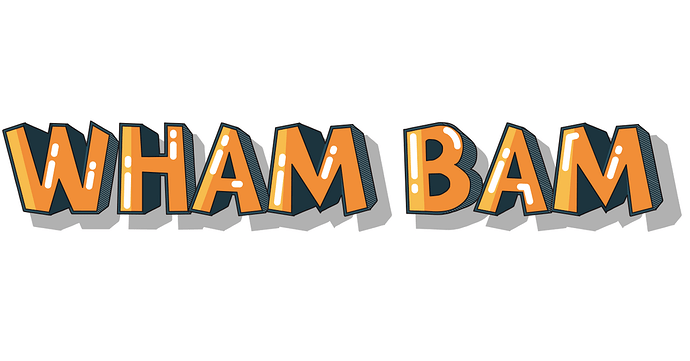 The main reason that I haven’t pulled the trigger on a 3D printer yet - aside from the expense - is that there just doesn’t seem to be one that, out of the box, will perform at its best. Whenever I read the reviews on something that looks interesting and is in a price range I’d be willing to spend, they seem to be a base model that requires upgrades or alterations to perform optimally. Or they need endless tinkering. It’s almost like, I have enough sh** that doesn’t work properly in my house, I don’t need to spend money on more of it

The sad part is that I could really use a 3D printer, there’s a lot of stuff around model trains that it would be useful for.

It can be a bit of a time sink, especially when you’re learning new concepts and such, but it is very satisfying when you have an idea of what’s going on. Fortunately there’s a lot of info out there.

Any good for kids to start out?

I have no idea. It certainly seems like it will be less hassle than a more mainstream printer.

I installed the wham bam bed onto my printer to replace the creality glass bed.
Wow! It makes a huge difference. The prints actually stick with a vengeance. It takes a bit of effort to get the prints off now, whereas with the glass bed it took a very light touch - in fact sometimes prints would fail because the head movement would knock the object loose.

After doing the bed autoleveling, I ran a leveling test. While it was printing, I realized I could hear the X axis thumping a bit, and there was a slight noise as the Z axis lowered. I adjusted the wheels on the X axis and it now runs smoothly, and greased the Z axis rods.

I printed another benchy and it came out great. 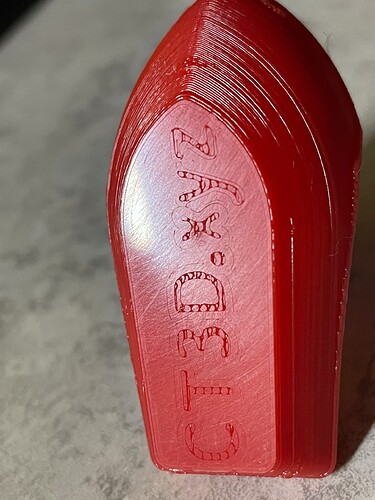 You can see here that the faint text on the bottom is fairly clear, and the bed provides a nice smooth surface.

Apart from some very minor faint strings, I think it came out pretty well. I could probably do some more calibration, like flow rate and temp towers etc, but so far I think the results are good. 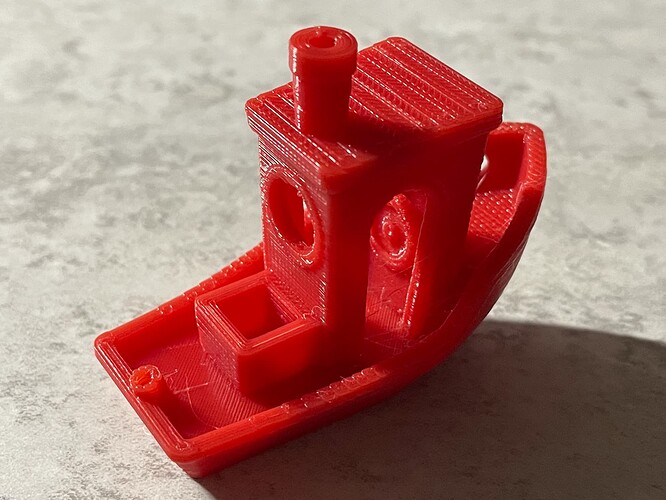 I’m not sure if I’m having filament issues or what, but for the second time during a 18.5 hour print, at about 15 hours the filament got mangled in the extruder. I thought the first time it happened was because I was printing too hot and caused the nozzle to clog which caused the extruder to mangle the filament.

This time I managed to catch it and pause the print while I fixed the filament. I pulled out the bowden tube on the hot end side and extracted the filament with no problems (hot end was still hot), and removed the tube on the extruder side and managed to extricate the mangled filament from the dual gears. I tested the hot end by pushing in some filament and it was flowing through just fine, so I reassembled, reloaded the filament and resumed the print. This time it finished with only a slight glitch in the print from where it lost a layer or two. Since the model is going to be painted the glitch can be repaired with some filler.

I’m using some local filament branded cc-diy. While the red has been good (up until the two mangling incidents), and I have printed successfully with the black, the silver version of it slips in the extruder so I stopped using it.

I think I will fork out for some proper well known brand filament and see how it goes from there.

I was printing a porg. The filament issues happened during the upper part of the mouth, just above the wing. 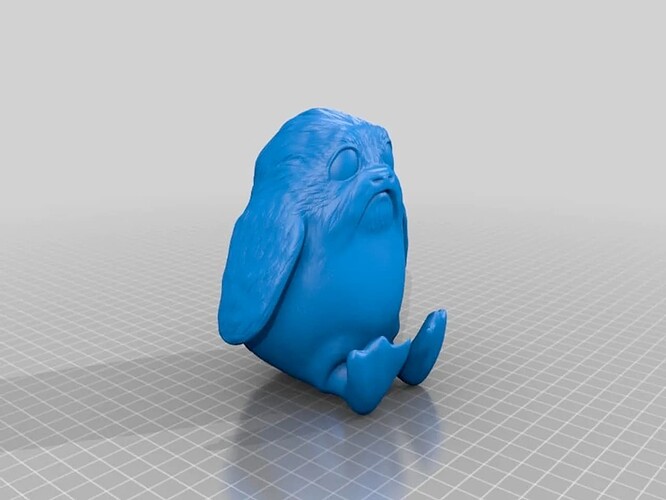 I will upload a pic of the print when I get home later.

Oh, did I mention that I switched from using Cura to Prusaslicer? I’ve had great results with using PrusaSlicer.

Here is the porg. You can see the line where I had the issue. 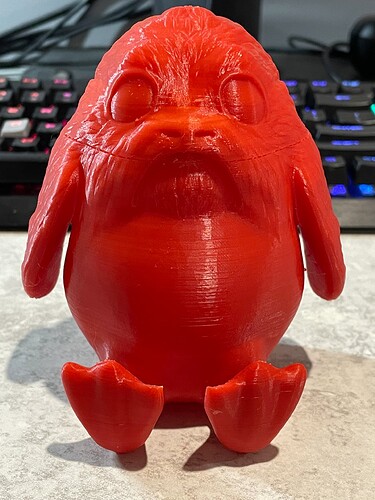 And here are the benchys. 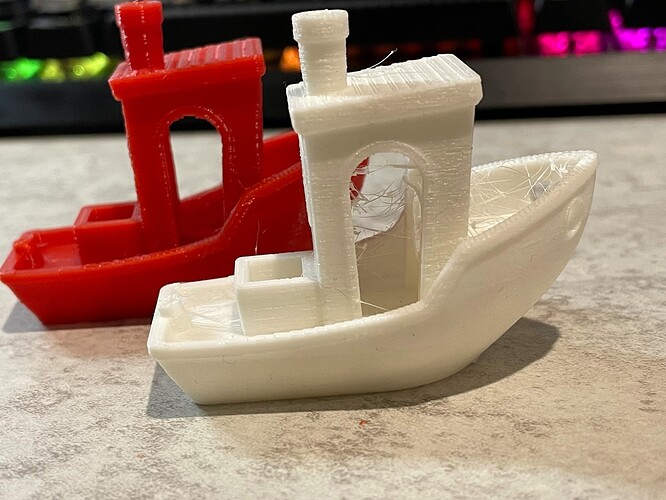 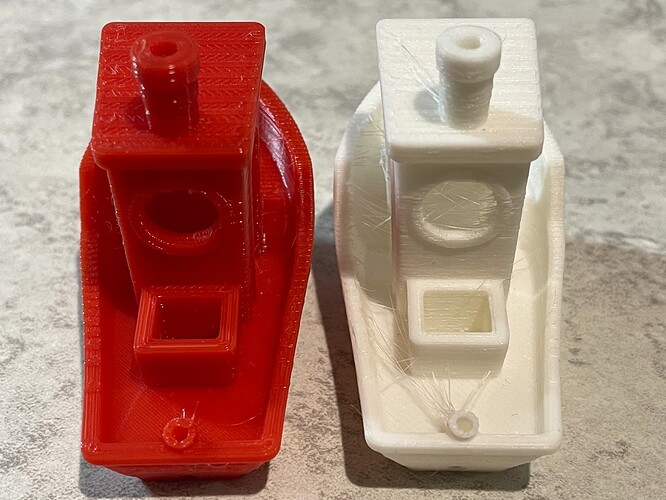