Does anyone have a copy or know where i can get an image? I don’t want to install a million advertisements or online websites.

EDIT: Ah sorry Gas, looks like they’ve taken it down. 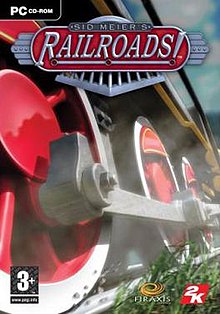 Sid Meier's Railroads! is a business simulation game developed by Firaxis Games on the Gamebryo game engine that was released in October 2006 and is the sequel to Railroad Tycoon 3. Although Sid Meier created the original Railroad Tycoon, subsequent versions were developed by PopTop Software. Railroads! was the first game in the series since the original to have direct input from Sid Meier himself. After a visit to Miniatur Wunderland in Hamburg, Germany, Meier was inspired to reinvent his origi...

It’s the sequel to Railroad Tycoon 3, and is currently available via humble bundle.

At last … some wisdom. Thanx.

Sid’s Railroads is not so good.
I have a copy of RT3 !

Sid’ keeps on bombing. It is nice little distraction though.

Have you come right with this yet Ga5?

Yes. I got Sid Meyer’s but it crashes quite regularly. It is just a little bit of fun on the side from time to time.

Hey @Gascan have you looked at this?

Heh, looking at the recommendations I’d say maybe not.

Trainz Simulator 12 - Build And Operate The Railroad Of Your Dreams....With Your Friends!Trainz Simulator 12, Now With MultiplayerTS12 includes the most exciting new feature in the history of Trainz. The players have asked for it and we have...

you can get it with humble bundle https://www.humblebundle.com/weekly

It’s not quite the same thing. Trainz and Train Simulator 2014 are train driving simulations.