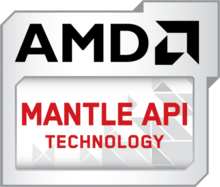 Mantle was a low-overhead rendering API targeted at 3D video games. AMD originally developed Mantle in cooperation with DICE, starting in 2013. Mantle was designed as an alternative to Direct3D and OpenGL, primarily for use on personal computers, although Mantle supports the GPUs present in the PlayStation 4 and in the Xbox One. In 2015, Mantle's public development was suspended and in 2019 completely discontinued, as DirectX 12 and the Mantle-derived Vulkan rose in popularity.[ The draw call imp... 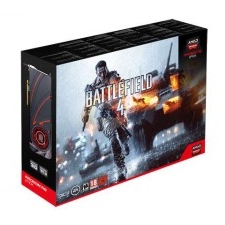 AMD has released a new demo of Battlefield 4 running on Mantle API with up to 45% performance boost over DirectX. Battlefield 4 Mantle Update would be coming later this month.

We will be getting the mantle API patch for BF4 this month, I’m looking forward to a 45% FPS increase! Is that 16X Anti-aliasing with no input lag I see?! (Mantle is also non-propriety which means nVidia may also take advantage of this API)

“Star Swarm is actually the first hard evidence we’ve seen of what Mantle can do, and the numbers speak for themselves: With everything else being equal, enabling Mantle increased the demo’s frame rate by nearly 300 percent, from an unplayable 13 fps to a buttery 44 fps. AMD promised as much when it launched its Kaveri APUearlier today, adding that Star Swarm will run at playable frame rates even on low-power 65-watt versions of the APU (versus 95 watts for a regular desktop chip).”

“Some RTS games set the limit at 50-70 units, while others can cope with as many as 500, but a new demo game calledStar Swarm takes things to a new level: It uses AMD’s Mantle programming tool to speed up communication between the CPU and GPU, allowing up to 5,000 AI- or physics-driven objects (i.e., not mindless clones or animations) to be displayed onscreen at one time. Coming up, we’ve got a 1080p video of what this looks like, plus an explanation of how Oxides Games, the company behind Star Swarm, made this possible.” 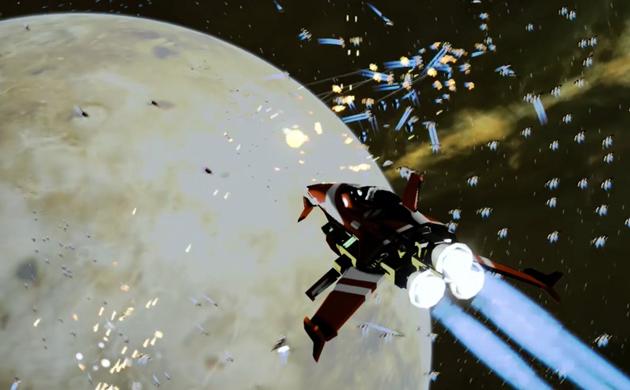 Next-gen strategy game engine lets you control an army of 5,000 units at one...

Every real-time strategy game has some kind of population cap, limiting the number of units that can be placed simultaneously on a player's terrain. 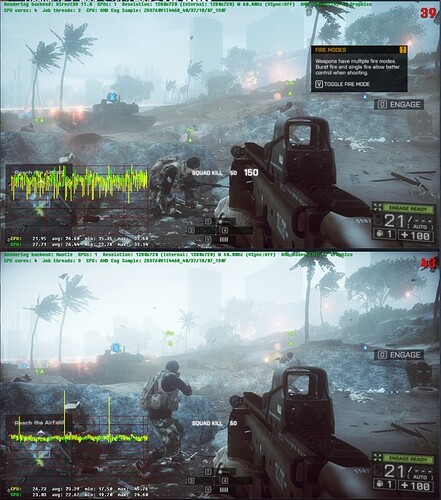 DICE Posts its Own Battlefield 4 DirectX vs. Mantle Performance Numbers

Along with its highly anticipated game patch that includes an AMD Mantle renderer for Battlefield 4, DICE posted numbers from its own testing, pointing out the performance difference between DirectX 11.1 and Mantle. DICE put Battlefield 4 through...

Dice benchmarks, holy crap. If you don’t have a GCN card yet, what the hell are you waiting for?

For those of you who were wondering about the 14.1 beta drivers from AMD yesterday, they were pulled back by AMD themselves as there was a nasty bug. The are prepping to release today EST time, which is 7 hours behind us.

my brother is using an AMD/ATI 7770 card. Quite curious to see what difference mantle makes on it.

In BF4 on a single card you can expect anything from 14% to 26% increase in FPS If those dice benchmarks were legit. That’s a massive boost.

Time to turn up some detail!

FWIW, this 14.1 beta driver only enables support for mantle on the R7, R8 & R9 series GPU’s. 7 Series to follow in two weeks time.

During the QA process, we identified an installation issue in AMD Catalyst 14.1 that renders it unsuitable for distribution for testing in your labs. We are testing a new build overnight and will update you on its status by mid-afternoon Eastern Standard Time on January 31. We apologize for the delay and appreciate your patience and understanding."
[/quote]

Here’s the benchmark for free on steam, you can bench mantle vs Direct X

Still no drivers though. 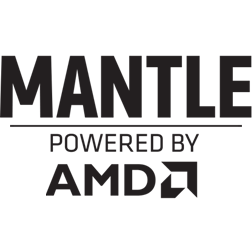 I was getting 120 fps, now getting 145. It’s a bit unstable though, keeps bombing out. Switching back to DX for now.

Mantle at the current moment is terrible. Fps drops for days.

if you have a 7 series yes, it’s not properly implemented on those cards. Only R7 R8 and R9 for now.

Seems like the APU’s gain the most benefit with discreet gpu’s!

I just stumbled across something very interesting.

With regards to Mantle, Thief & BF4 don’t have a full implementation of it. Rather they have a ‘mantle wrapper’ which takes all the DirectX calls and translates them into mantle. The only benefit is the reduced CPU overhead and slightly higher FPS. (remember the days of 3DFX wrappers, same thing)

Star Citizen & Oxide’s engine have full mantle support. I.E they will have mantle calls from the word go. This translates into massive boosts in performance. Full support of mantle enables developers to directly access the hardware. I.E The developer can assign X amount of cores for physics calculations, and X amount of GPU cores for rendering & X amount of GPU memory for Textures and so forth. Compared to DirectX, where the game would request functions to be done and DirectX was in charge of allocating resources and sometimes doing a poor job at it.

So with full mantle support yet to be seen, the current gains of 10-20% could very well be the massive 45% that AMD claim. The future looks bright. Undoubtedly, APU’s are set to gain the most benefit, second would be AMD GPU’s.

On the Plus side for users of other companies, Mantle has forced a number of key players to step up.

In the end, We all owe thanks to AMD. The end user will benefit from this whether you use Nvidia or AMD or Intel (HD graphics, ultrabooks, tablets etc) Or Qualcomm (tablets/phones)