Minecraft, what’s that? Space Engineers, get real! This is the shizzle my nizzle. The real deal! The actual factual! Ja I have never heard that last one either…

Pics and story to follow. Next time. Now, now. In a bit. ‘Cause I’m feelin’ kinda sleepy.

The funny thing, I forgot you had a 3D printer, I needed pieces of plastic for my car and the dealer wanted me to purchase the whole console. I went to a print shop around the corner from me and they made one for me using a 3d printer.

Vorty’s bright and cheerful reply was that he did indeed have direct access to his own 3d printer. What followed was a rapid exchange of questions which yielded the following. Oh, Bass also joined in on the Trivia… we shall call him Basstid for now because he recently also knifed me a lot.

Where was I… yielded the following:

After some Sketchup time I was able to send Vorty a STL file of the this bad boy: 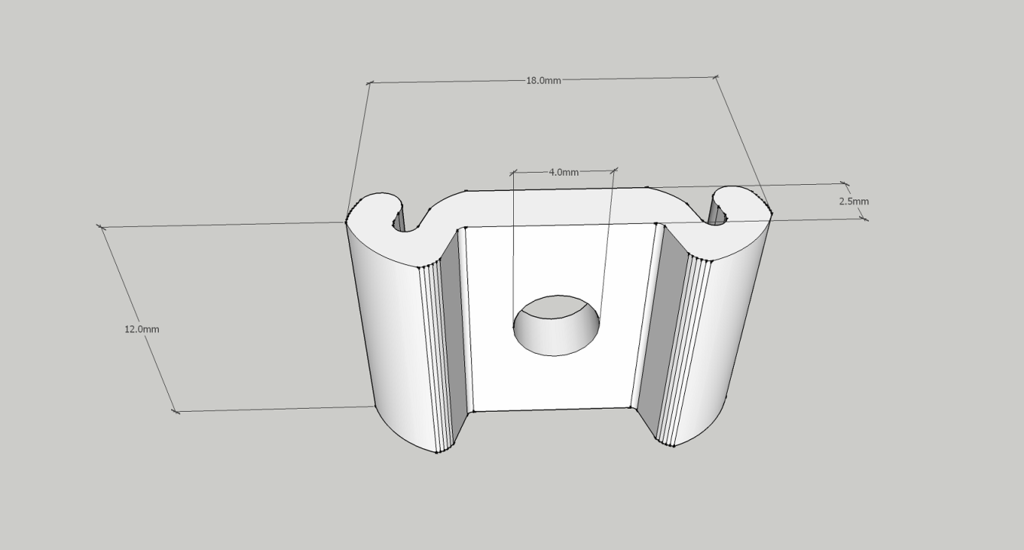 Vorty printed out “three” demo bits and with the help of Tres they released a package containing 3d printed goodness into that void of despair know as the South African Post Orifice. SAPO took a long time to to unsuck itself from the package so that it could ooze on over to PE.

I got a packet of clickety rustling in the mail on Monday, which may be called Funday for this week only, in this photopicture below you can see a back of blue amazing next to a bag of what I used to use to do the job of hanging bling from my fuel eradictor. 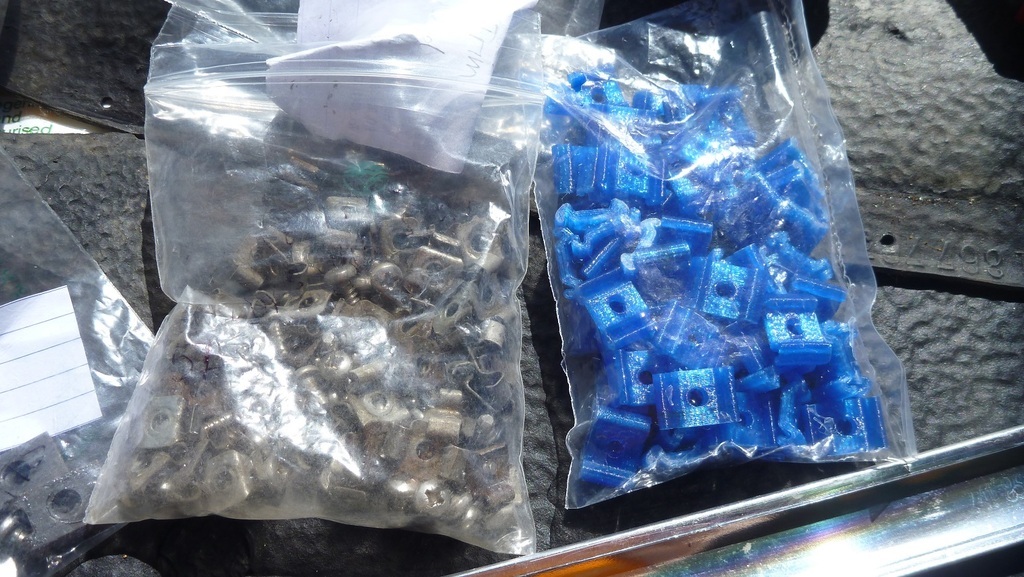 I was so awfully impressed by these things that I took many pics of them at different angles, in these two you can see a short piece of bling. The dark side is facing you (the side we never see). The old clips are there for comparison. 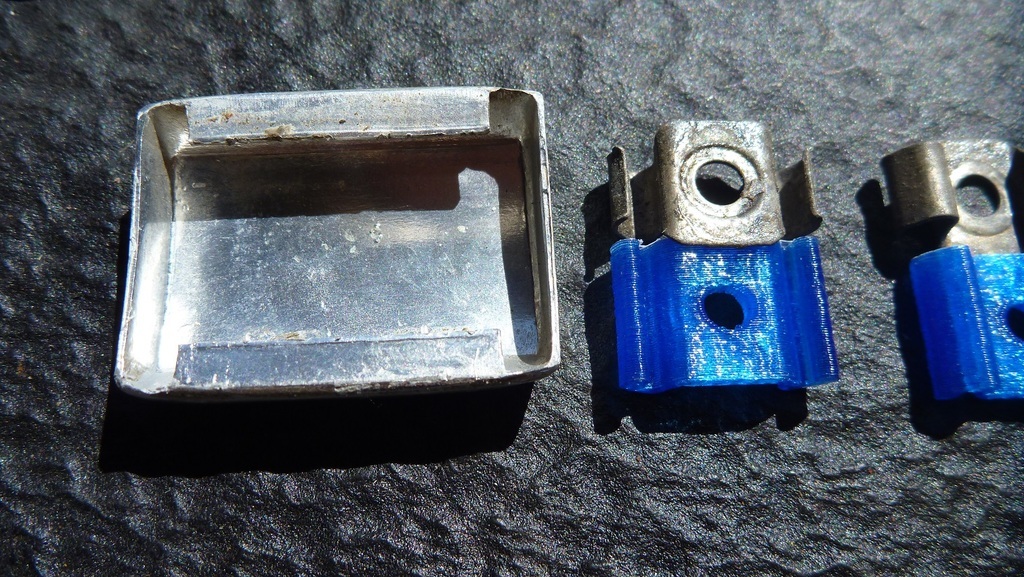 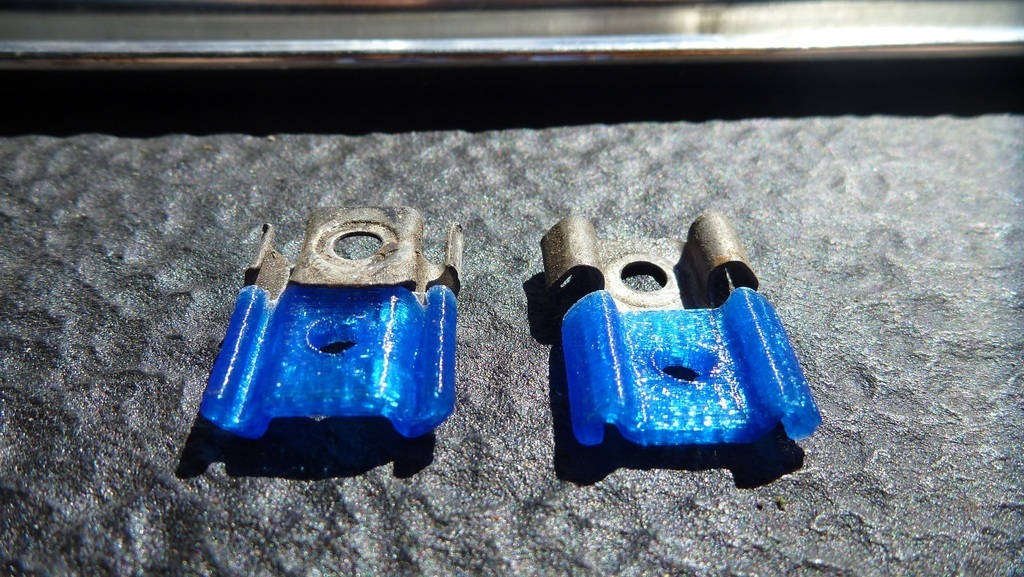 I have tossed the old mild steel sheet metal screws and now use stainless ones to attach the clips to the Fuel Detroyer like so: 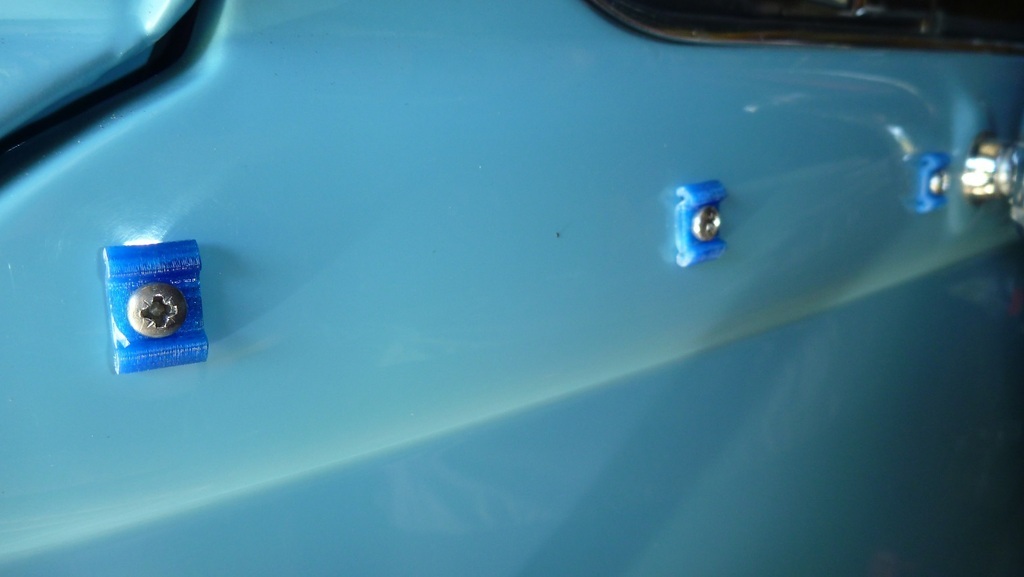 When you look at the profile from the side you can see how the clip clippeth. 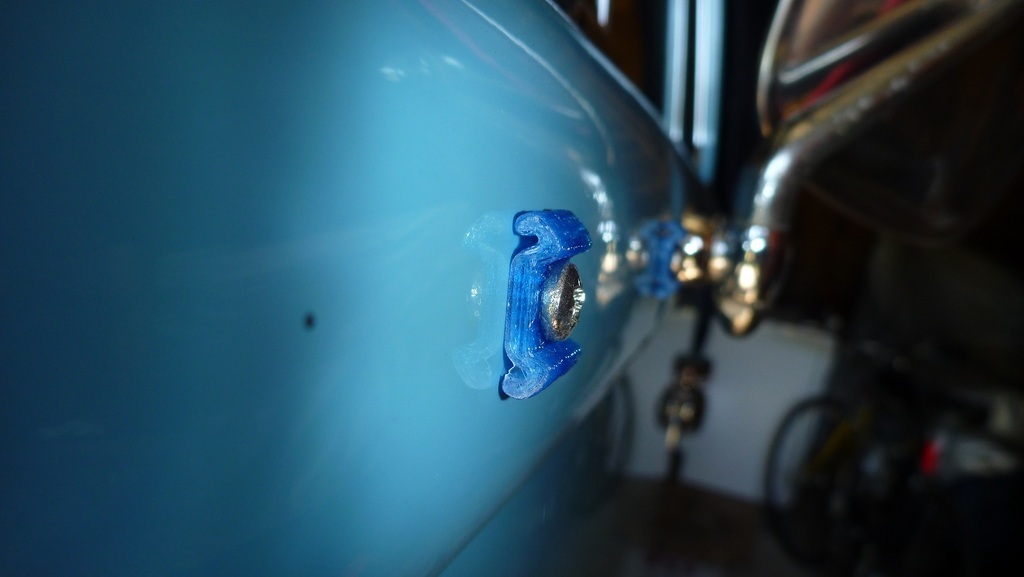 The bling has succesfully been hung upon the new clips. I have more to say about that but first… 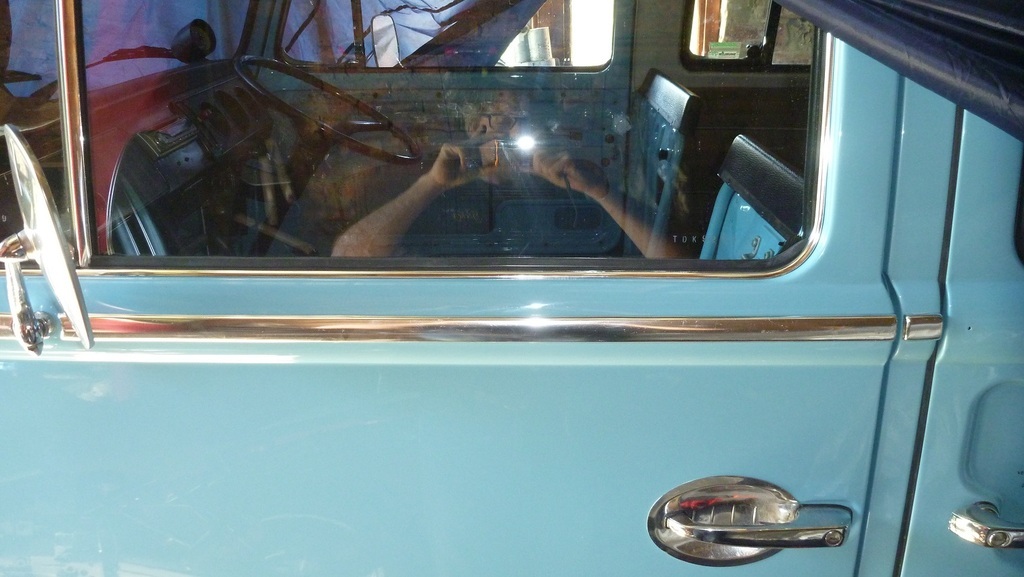 …but first. Vorty I may not forgive you for your evil knifing ways but I am most grateful for your kind assistance with this project. Muchos Grasias. You are a king amongst these WrG swine, this week anyway, and I thank you thankfully in a thanking thankful way for these little blue bastards.

Blue bastards… Well I really didn’t expect them to work on the first try but they do. They work very very well, too well. They are strong and hard like lego. To clip the bling on I had to hook the bottom lip under the clip and the apply many Newtons along the Y axis combined with many along the Z axis. This force helps the bling upper lip over the top curve on the clip. It clicks very, very firmly into place, which is a problem. If I ever want to remove the bling I may break it in the process. It’s going to be a truly grueling, agonizing event. I think if it has to be done it will be better to scrap the van. If we make any more of these we should think about either shrinking the clip or using a softer material than abs.

One last thing. It has been immensely satisfying to draw something and get it back in the mail. Amazing experience. Vorty, in the words of Kelis, you should charge for this.

One last thing, TG why no BF4?

One last thing, Flea how could you forget that Vorty has a 3d printer and why no BF4?

You should @Vorty so he gets tagged and knows about his new 3D printing and mailing service to all and sundry.

Yes, you should do that!

@Vorty what model 3D printer are you using? I’ve been looking into getting one for the office because we have quite a few designs that we would like to prototype housings for.

Where did you procure yours from?

Hey @Stool…
I encouraged work to purchase an Ormerod kit from RS Components, and it was so much fun that I ended up buying a Prusa i3 kit from a Durban company for myself - www.diyelectronics.co.za - I went for the bells & whistles

BTW. The online software OnShape is actually pretty awesome - worth a check out!

It should definitely last…

you mean those ballistic shields that @Sabre has serious issues with

That is very cool.

Pity I don’t really have any use for a 3D printer.

@stool other printers I have seen

This one has the scanner built in, but you can get it for a little less without the scanner.

Sheep, Wow, that looks cool. Wish I needed one for something.

And impressive work Vorty and Drusky. Thanks for all the pictures.

never really considered that takealot would have anything. Thanks for the info sheep.

O and thanks @Vorty. Sorry thought I already said it.

What does you service cost btw. Dont say its for free!

@stool haven’t actually developed any pricing for it - I kind of do it for fun, so guys that have given me big jobs have paid me back in filament

When Dru did all the hard work and all I did was run them off I didn’t bother charging the man, but if 100 of his closest friends also want the clips I’d probably sell them for R1 a piece + shipping or something …
The actual weight of the clips that I printed for Dru was probably at the most like 30grams, so in material costs probably something like R7.80!

A friend that I printed a hubcap replacement for said that 3d printing shops quoted him R10k for 4! It probably cost R150 in material, so if you go by those guy’s guidelines there’s some good money to be made!

If you’re interested in getting into 3D printing without having to take out a second mortgage on your house, keep an eye on this little gem.

It’s still in the pre-release phase but they are predicting it should ship by end November and then post-kickstarter sales for the finished product should start around February. The design is very well done and thoroughly thought out, and should the initial Kickstarter backers provide positive feedback once it ships, it will be a great little intro to 3D printing without all the pitfalls that plague even very expensive machines.

These guys look quite competitive too.

I like this. Do you think I should buy it?

They strangely enough have a very similar machine to the kickstarter chaps too $368: 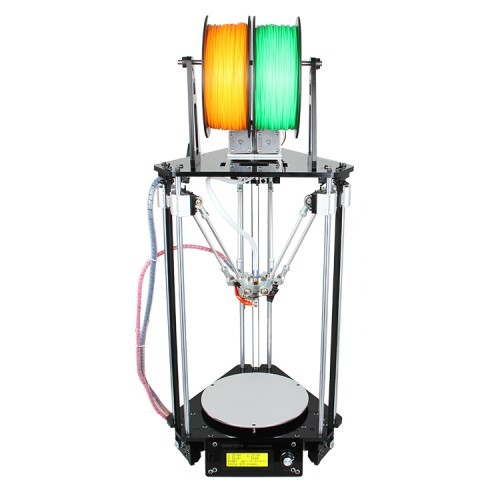 I’d really love to get a hold of a delta bot like those - they just look so funky!
Some mean maths going on there to make the print head work correctly. 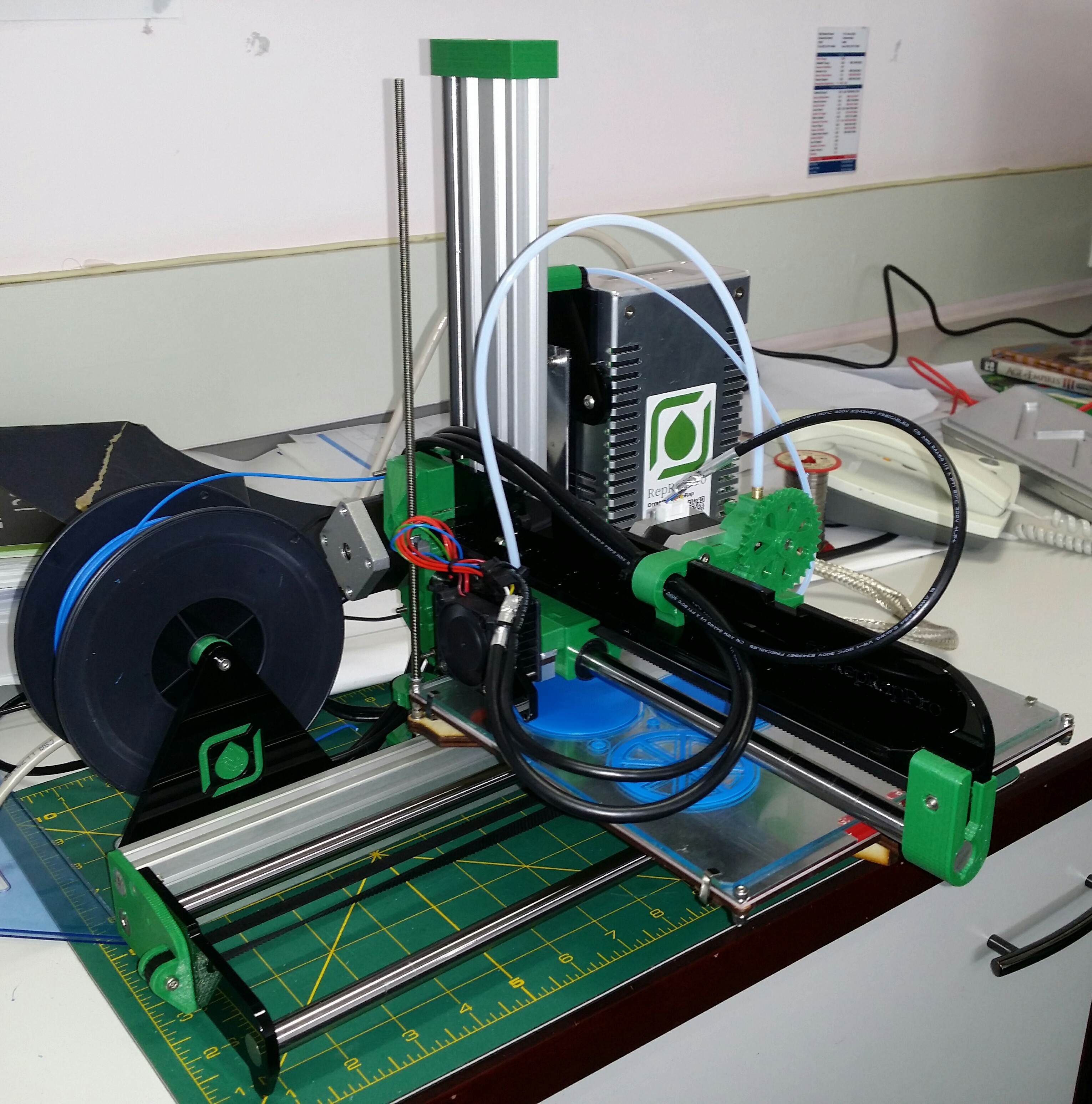 Just finished the build of our latest printer. It’s become so useful from a work point of view we could justify another one.